Puppies in training for police duty 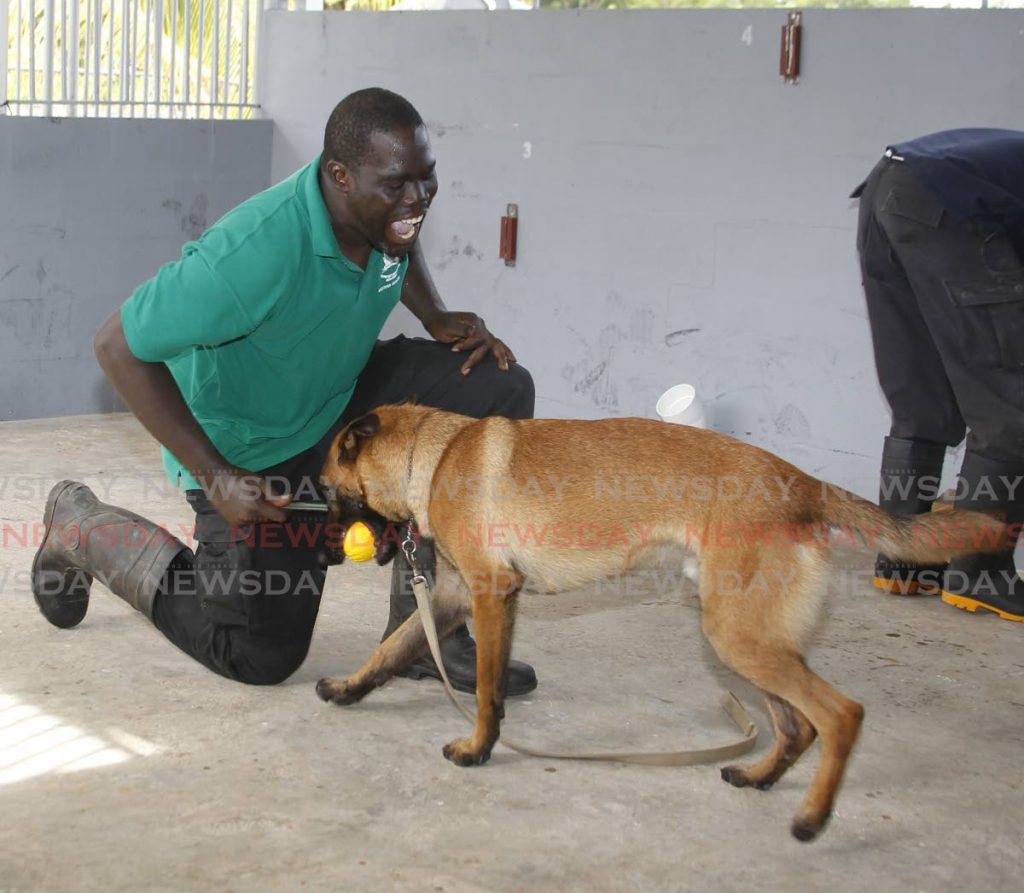 PC Murray celebrates with Anya from the A-Team pups after identifying hidden targets during a police dog drill in Cumuto. –

No school bell rings, but one by one the A-Team pups storm into the Cumuto dog police training room, like happy children returning to class.

With a laser-like focus, the Belgian Malinois / German Shepherd puppies focus on brown wooden boxes attached to the wall. The first of four litters police puppies are looking for a target smell – drugs like heroin, cocaine and marijuana or part of an explosive device.

The pups are working to get a chance to play with a soft yellow ball on a string that their trainers, Cpl Shane Chase and PC Leon Lopez, throw behind them. The pups’ sinewy little bodies jump for the toys and then play tug of war with the officer.

It all looks like fun, but Chase and Lopez evaluate the puppy’s personality and performance to determine exactly what discipline these dogs will practice as police dogs.

Who will the Narcotics Detection and Tactical Dogs be? Who will the explosives detection dogs or the corpse dogs be?

Born last October, the A-Team pups later suffered a setback when they contracted parvovirus, but regained their strength and recovered the most. A nameless puppy died; then Ati almost died. The police worked around the clock to rescue the sick pups.

Now the males – Alpha, Ammo, Apollo, Arrow and Axel – along with Aniva, Ava, Ashes, Anya and Ati are preparing to officially join the Police Dog Working Group when they are 18 months old. The pups show surprising progress. They have their own individual personality and make different levels of progress.

“Some puppies develop gradually. Some have a hard time and it just clicks overnight, ”said Lopez.

All of them have their lovable qualities, though Axel can be frustrating with his careless attitude.

WPC Figuero and PC Lopez from Canine Unit Coach Apollo the A-Team puppies through the obstacle course in Cumuto. –

Axel was on sick leave due to a ligament problem and is still in the early stages of training to look for his toy in an elbow-shaped PVC pipe. If he stops and directs his gaze to the pipe the toy is in, he will be rewarded with this ball on a string. The dog police still have a soft spot for Ati.

“She fought for her life when she had parvovirus and she tries so hard. She just doesn’t have the body to do much of the job, and she knows, ”Chase said.

Although tests have shown no congenital hip problems so far, Ati’s hind legs are shaking and she has a slight limp.

“If only I could put Ati’s brain in Axel’s body,” said Chase.

Ati is the only dog ​​that an officer is exclusively dedicated to. Cpl Premnath Maharaj takes her on long walks and spends extra time with her because of her hip problems and the time she has lost due to her illness.

“She’ll make it,” Maharaj insisted. “She is resilient.”

To become dual purpose narcotic / tactical dogs, pups need tenacity. You have to be strong-willed and brave.

Tactical dogs need to be used in a variety of settings and like to bite in case they need to catch a fleeing suspect. Your bite work training has not yet started.

Explosive sniffer dogs must also be tenacious and fearless. They have to explode through Parliament or the venues visited by the President, Prime Minister or other dignitaries, so their work requires scrutiny. For this job, it is best not to have dogs acting like cops in a china shop, as explosives detection dogs may need to search in an open field or in a hotel restaurant with crystal glasses.

Chase and Lopez keep all of this in mind when evaluating the ten pups.

Lopez described Ashes, the only all-black dog, as “mentally strong. If we put it through its paces and correct it, it will not go into a shell. She continues with the same drive. Take the toy away, tell her, ‘Leave it’ and she will keep reaching for the toy. “

“She’s into her habits,” said Chase. “She wants to bite. She always wants the last sip of the toy. “She’s the most stubborn puppy of them all.”

Lopez described Apollo as “brave. He is the puppy, always ready for a new challenge. When we do exercises or take them with us on the obstacle course, he will watch something carefully and go through with confidence the second time. He has a good work ethic, great drive, and a strong will. He is obedient. “

“It’s the little engine that could,” said Chase. “He’s brilliant and thinks a lot. He is stable on the obstacle course, a quick learner. “ 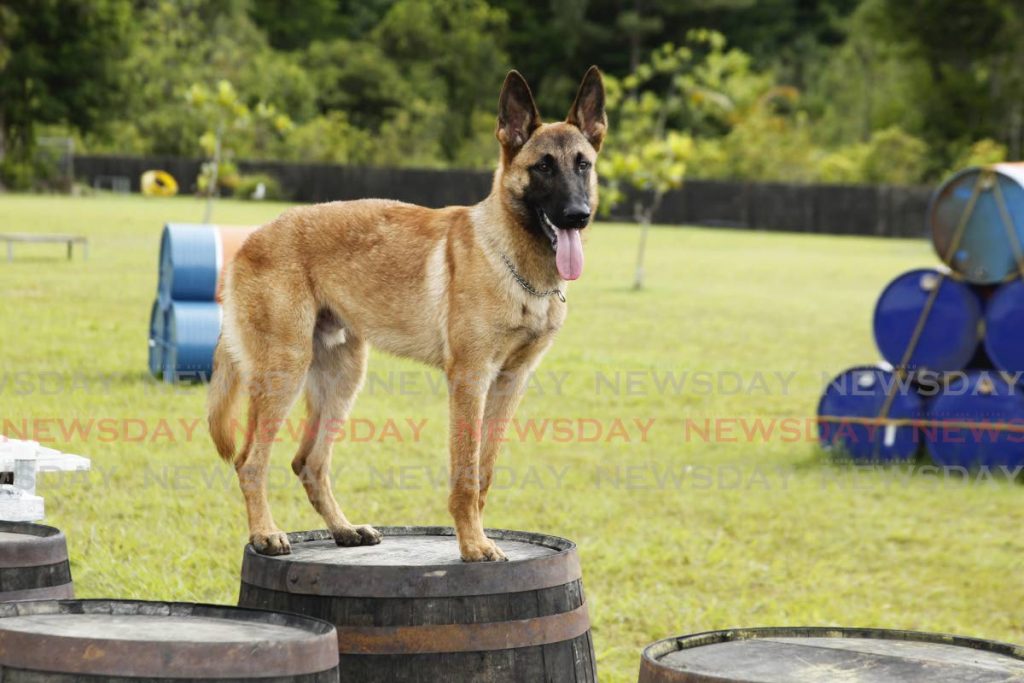 Apollo the A-Team puppy stands guard on a barrel placed on the obstacle course during a police dog exercise in Cumuto. – PHOTOS BY ROGER JACOB

“I would say Alpha is persistent,” said Lopez. “Over time, he has developed a good work ethic. He wasn’t always like that. One day he just got it. He just turned around a month ago. Everything went well with him. “

“Alpha was slow to learn, but he’s toy driven. As soon as he knows the toy is in, he wants to go out and work, ”said Chase.

Ammunition is the quirky-looking, thick-necked resident Mako. He has a kennel near the exercise room and he loves to stand on his back legs to see what is going on. He looks weird with his one upright ear and one ear that doesn’t stand up. But ammunition is no joke.

“He’s a monster,” said Chase. “He comes full of energy, ready to take it all apart.”

Searches for ammunition at lightning speed and confidently points out a target substance.

“He’s going to push his way through the wall trying to find what he’s looking for. He works fast and brings that energy every time he searches. You have to hold him back and slow him down,” Chase said.

Anya’s energy competes with Ammo’s. She has a high toy drive.

Chase described Anya as “flirtatious. She will give puppy eyes so that she can go her own way. She is brilliant … part of her intelligence is to flirt. She looks you in the eye, puts her ears back, dances around, rolls over and says, ‘Look how cute I am. Do not yell at me.'”

Anya’s sister Ava is described by Lopez as spirited and with “a good drive”.

She is also a drama queen.

“If you give her a check to take the toy away, she’ll argue, bark and carry on,” said Lopez.

She goes on in the training room so loud and long that you could swear she was being tortured. Ava is as loud as a dog can be.

“She’s not that aggressive,” said Lopez.

“Ava is easily distracted,” said Chase. “During the search, she will stop when she hears something, and only when she sees what is coming or what is passing will she continue her work. She won’t come back to you no matter how many times you call until she sees what’s going on. “

Aniva gets an “A” for the best improved puppy.

“She was on sick leave with her leg and when she came back, all of her training clicked,” says Lopez.

“She’s the little girl who came from behind,” said Chase. “She’s playful because she’s a puppy, but she comes out and works. It is the little engine that could do it. She is a dark horse. “

Arrow, the introvert, has a high will to work and a good work ethic, but he doesn’t enjoy interacting with people. He plays with his toys and a dog officer, but prefers to go to a corner and bite his toy.

“He’s very smart and quick to learn, but folded up when he saw a large leaf on one of her walks,” said Lopez.

“We had to throw the toy away so he could get over it,” said Chase.

Chase said there’s nothing like training puppies to be police dogs.

“To see a puppy being born right in our enclosure is something special. The puppy who is new to this world doesn’t know anything. We have this puppy in our hands and we shape its behavior psychologically. To be able to get this puppy to do what we want without correction; To see this puppy grow and develop into a police dog is satisfying. “

Chase said it’ll be even more satisfying when puppies are paired with handlers. The dogs and the handlers go through a course and pass out together when the dog is around 18 months old.

“It’s going to be a heartwarming, truly fulfilling experience,” said Chase, who has been a police dog trainer since 2006.

Chase ponders the working lives of these pups.

“What we expose these dogs to during training is nothing compared to what they will experience outside. You will have to overcome unforeseen challenges and obstacles. “

On Thursday, the ten A-Team pups traveled to the Mounted Branch to familiarize themselves with the horses. The pups practiced their commands on the horse field and showed their skills. Ashes jumped into the horses’ water trough, much to the horror of one of the dog officers.

“It’s fine,” Chase called. “It’s all part of their socialization.”

The other pups happily left their work in the field and jumped into the trough to swim.

After all, they’re still puppies.

Dogs For Good charity needs volunteers to socialise and look…

The 11 dog breeds that could become extinct in the UK